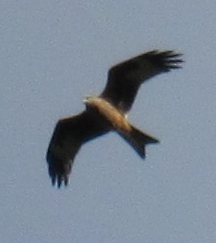 As we were walking back from Rodborough Fort this morning, just entering the quiet back lane by Winstone's, my wife Mary shouted "Kite!". I had been told that they were around (Mary has seen them before) but it is nice to see with your own eyes.

This is the best I could do for a photograph: a couple of hundred pixels each way cropped from a full frame taken with an IXUS 100 compact as the kite flew overhead - but at least I had the IXUS with me as I normally do, almost always ready for action in a few seconds - while the camera with the long telephoto lens was in the cupboard at home (where it spends most of its time).