What a difference a week makes!

A bit of sunshine, a bit of rain and the Common is bursting into life. On a walk to Rodborough Common today my wife, Mary, and I saw eleven difference species of butterfly, including the Duke of Burgundy, and also found that the wild-flowers are rapidly changing the appearance of the Commons. The cows arriving back on the open ground tomorrow will even find the grass growing.

The Duke was one of several we saw, on both Rodborough and also the Swell's Hill site - mostly rather lively so without a long lens good photographs were hard to come by. We also picked up a Small Blue and a number of Dingy Skippers and a Green Hairstreak. (Mary finally found an Orange Tip - though we know they have been around for a while, we had found them elusive.) "Roman" Snails were also looking very succulent around the Duke's usual habitat.

May Wild Flowers on Minchinhampton Common 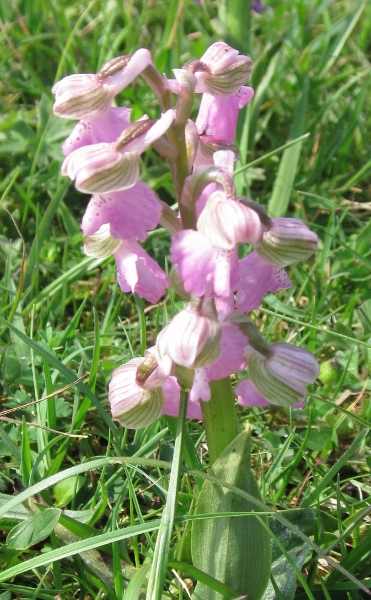 Duke of Burgundy seekers were also observed, one of whom also told us of a Pasque Flower not too far away - but we were unable to find it. This is, nevertheless, interesting because for the last couple of years Mary and I have failed to find them in the normally good Pasque site above the road down from the Bear.

The early Dandelions are now going to seed and the Common is also acquiring its usual May coating of yellow from the Buttercups. We also picked up an unusual white Early Purple orchid, and an attractively pink Green Winged orchid.