The group was formed to share knowledge about the unique wildlife habitats in the parish of Minchinhampton and to enjoy the local environment in the company of like-minded people. We also monitor and investigate local habitats in conjunction with conservation organisations. Knowledge that we gain is shared on this website and by creating documented walks around the parish.

Dateline: Good Friday, 25th March 2016 - my first Brimstone of the year, a golden buttery-yellow in colour flitting through the garden, surely a sign of Spring. I wondered on the rain soaked Saturday that followed how it would have faired. They are great survivors - its life would have started in May or June 2015 as an egg laid on a sunny twig of a buckthorn bush in a hedge or woodland edge, the egg would have hatched after two weeks and our small green caterpillar would start to feed on the upper surface of a buckthorn leaf. During July, now a fully grown caterpillar, it would pupate and form a chrysalis. A further two weeks and our fully grown Brimstone butterfly would emerge.

Next priorities would be to feed up on nectar rich flowers ready to hibernate over winter, find a mate in March and April and thus start the life cycle once more. The male of the Brimstone is bright yellow, the female is a much paler green-white.

Do we have Dormice living in Minchinhampton Parish?

Surely we must have, we just have to find them. Within the parish there are suitable woodlands and old hedgerows, habitats they need containing shelter and food plants - honeysuckle, hazel, bramble and other flowering and fruiting species. Dormice can be found close-by in the woodlands of the Chalford Valley.

Over the last two years a number of special nesting boxes have been sited on private land near Cowcombe Hill and Knapp Farm to try and answer the question, though these have so far only been occupied by Blue Tit families. Further monitoring will continue this season. Sometimes a dormouse can be found tucking into peanuts in bird feeders so if you have any in your garden close to hedgerows it is worth keeping a look out for them from late March onwards.

The Common or Hazelnut Dormouse is a small creature, has a thick furry tail and is bright golden-brown in colour. It has large liquid-black eyes that are quite beguiling. It is about the size of a small mouse, 70mm body length with its bushy tail the same measurement. A fully grown adult weighs 17g or so in the spring and around 35g by hibernation in the autumn. They feed on flowers, pollen, insects, ripe nuts, seeds and fruit.

If you are lucky and see a dormouse or find a ball shaped woven nest, close to the ground, often in low bramble bushes, can you let the author know please.

Despite the mixed weather of recent times, how lovely to have had a dry spell. As if in response, on the sunnier days, Sky Larks have been singing from on high on the Common tops. This prompted a discussion during our February walk as to whether the Skylark is resident or migratory. Well, it seems that in western Europe, Skylark populations are mostly resident although these birds can 'migrate' in winter from high ground to the warmer lowlands and the coast. Birds from Northern and Eastern Europe have to migrate to survive and on passage these can mix with resident birds and even compete for territory. What is known for sure is that the Skylark is one of the earliest songsters. Not an indicator that Spring is here but hopefully a sign that it's not too far away!

Notes on Butterflies found in the Minchinhampton area in 2015 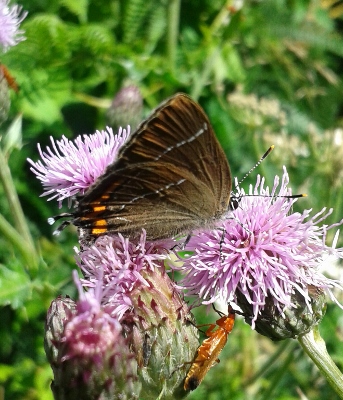 Over the last six years I have enjoyed looking at butterflies within a number of selected sites on the Common and surrounding area - The Bulwarks, Pinfarthings, the Knapp etc. The first sightings of the season are usually in my garden and this will spur me on to look further afield.

Small Tortoiseshell and Peacocks that have over wintered as adults, possible in my wood shed, appeared first in early April followed by Large White, Brimstone, Orange Tip and the beautiful Holly Blue.

Read more: Notes on Butterflies found in the Minchinhampton area in 2015

Make Time for a Snowdrop Walk!

There is a very fine display of snowdrops at Cherington Pond at present. Worth a trip and a walk in the local wood. (I will not recommend the route that I did this morning, however. Far too much mud!)